Typography is the art and technique of arranging type, type design and modifying type glyphs.

Typefaces, which are also known as fonts,  are classified into two main groups: serif and sans serif

Serif type has small strokes at the ends of each letter. The strokes are there to give the character a better appearance and more importantly to guide the eye to the next letter or word as they are read.  Examples of Serif Fonts include Times New Roman, Garamond, Helvetica, Cambria.

Sans serif is type without serifs. These characters look clearer and more legible than serif typefaces ans so are used for headlines and captions. Comic Sans, Arial, Tahoma.

Ornate fonts are difficult to read because we are not used to the stype and our eye wanders from letter to letter. These type faces cause reading confusion and should be avoided.

As a general rule a document should never contain more than 3 typefaces.

Daniel Will-Harris  writes about Choosing and using Type being an emotional decision.

Alex Poole,  an interactive designer,  has written up a comparison on the scientific research conducted about both serif and sans serif typefaces.  He states ” Finally, we should accept that most reasonably designed typefaces in mainstream use will be equally legible, and that it makes much more sense to argue in favour of serif or sans serif typefaces on aesthetic grounds than on the question of legibility. ( Bernard, 2001 ; Tinker, 1963 )”

Image: ‘The Characteristics of a Typeface (for widescreen+displays)‘ 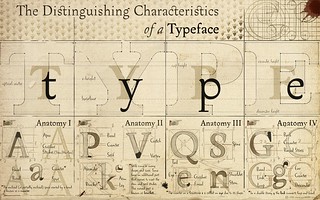 View all posts by fjostsons →